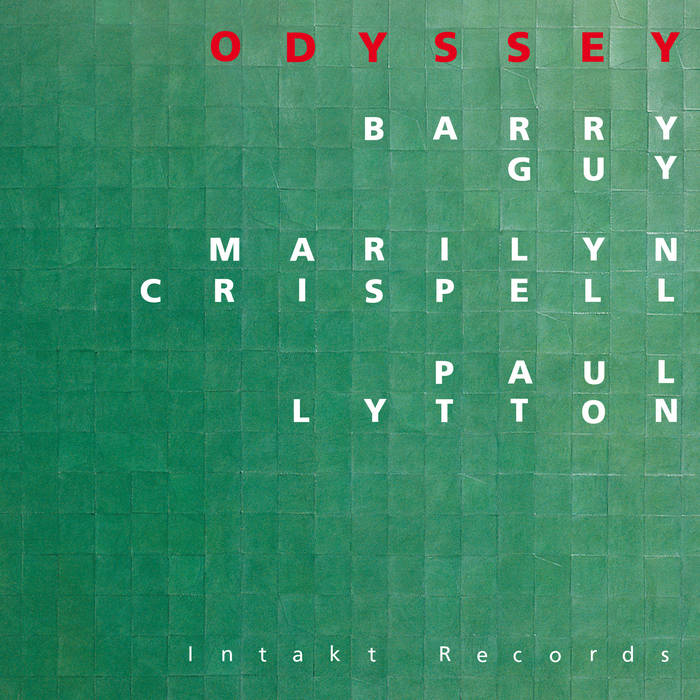 On the CD «Odyssey,» Barry Guy, Marilyn Crispell and Paul Lytton
play several of Barry Guy¹s most beautiful compositions: «Harmos,» «Double Trouble,» and «Odyssey.» Barry Guy is a first class composer, even when we lose sight of this in face of his diverse work as an improvising bassist. In addition to works for contemporary orchestras and different chamber music ensembles (for example Kronos), he has written influential compositions for the London Jazz Composers Orchestra or the Barry Guy New Orchestra. In the trio, Barry Guy¹s compositional talents and his special tone colors are fully evident. At the same time, the trio leaves space for the improvisational highlights of the three soloists.

Magnificent muscial event (5 STARS)
Odyssey, Barry Guy, Marilyn Crispell and Paul Lytton's first recording as a trio, is a magnificent muscial event. While it may not exist in a vacuum – After Appleby (1999) and Native And Aliens (1996), where Crispell joined Guy and Lytton's longstandig group with eaxophonist Evan Parker, are near relations – Odyssey redefines motion and mood, reaching a level of interaction so high that it must surely be a signal moment in the history of modern trio music. Here, collective improvisation (four exquisitly gauged trio variations) and predetermined materials (five Guy compositions, including arrangements from the London Jazz Composers Orchestra and his New Orchestra books) are plotted with delicious ambiguity, an expertly conceived union of freedom and form. Pieces rarely pick up steam by conventional means; the overarching colors are grays and browns, shades that suggest something more than mere contemplation.
Individually, the musicians are transcendant. Percussionist Paul Lytton, an often underrated voice, provides a subtle network of layers, scrambling through appliances, including, what must be, a stray piece of sheet metal. Pianist Crispell, still a thundering force on occasion, returns to the neat, compact lyricism we have recently seen in her own trio with Gary Peacock and Paul Motion. Finally, there is bassist Guy, whose reach extends from astonishing arco effexts to rich, cascading pizzicato figures. Odyssey is his date; he deserves credit for the trio's absolute clarity of purpose.
Indeed, this is chamber music so finely nuanced that by the finale we're perfectly absorbed in the drama. After «Harmos» opens in a acrobatic bass-percussion exchange, Crispell enters halfway through, slowly unfolding a dirge (Ornetee Coleman's «Lonely Woman» comes to mind) in a crescendo of sweeping majesty, a concentrated orchestral gesture rising to the end.
Greg Buium, Downbeat, USA, 6/2002

Thoroughly absorbing trio music
Much has been made of pianist Marilyn Crispell's turn towards deep lyricism in recent years. Intriguingly, the compositions of bassist Barry Guy make greater demands on this aspect of her work than even Annette Peacock's. Odyssey confirms that Guy is a harder composer to peg, as he can effortlessly shift from the earnest folkish feel of the title piece to the tumult of 'Rags' without Peacock's arch longing and lamenting. Crispell is also called on to extrapolate Guy's charts of such London Jazz Composers Orchestra chestnuts as 'Harmos'. Her performances are, in turn, magisterial and poignant, galvanising Guy's often staggering output and percussionist Paul Lytton's offsetting textures into a thoroughly absorbing trio music.
Bill Shoemaker, The Wire, London, February 2002

Among the crop of outstanding efforts for 2002!
The sound and overall scope of this project might be akin to Ms. Crispell's previous trio efforts with bassist Gary Peacock and drummer Paul Motian. However, everyone shares top billing here, as the artists' visceral exchanges surge forward with the graceful fluidity of a mountain stream. The trio delicately bobs and weaves amid an abundance of tastily rendered micro-themes. Without further ado, count this release among the crop of outstanding efforts for 2002!
Glenn Astarita, All About Jazz.