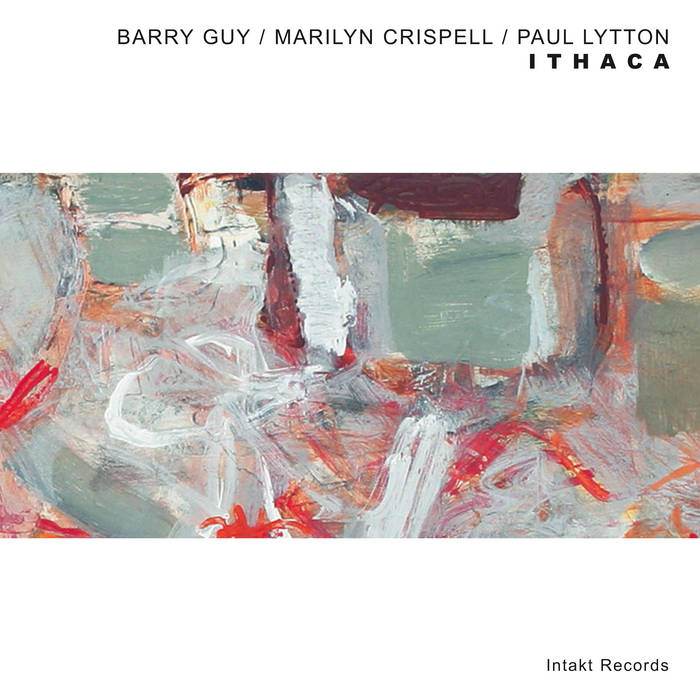 After the highly praised trio CD, Odyssey, the composer and bassist Barry Guy presents a new CD - ITHACA with the same trio members, pianist Marilyn Crispell and percussionist Paul Lytton. For his new compositions, Barry Guy was inspired by modern architecture and painting. George Vaughan's painting Ithaca as well as the constructions of both architects Zaha Hadid and Daniel Libeskind served as inspiration.
A music has emerged of a tense and lacerating beauty. Tonal painting contrasts with abstract reflection. Expressive moments stand next to elegant moods. Powerful improvisation goes up in lyrical intimacy.


REVIEW
These three players share quite a bit of history. Bassist Barry Guy and percussionist Paul Lytton are two thirds of an extraordinarily long lived and uncompromising free improv trio with Evan Parker; pianist Marilyn Crispell has worked with both that ensemble and the grouping that makes a return appearance on this disc. Still, they find a distinct group voice on Ithaca, one shaped but not dominated by Guy’s compositions.
His writing here is inspired by painter George Vaughan, whose painting “Ithaca” gives the record its name, and architects David Libeskind and Zaha Hadid. The liner notes discuss their respective creative efforts, but one doesn’t need to know their work at all to notice the spaciousness, carefully etched shapes, and planned progress of the 11 tracks on this CD, which is very different from either the blizzard-like density of the Parker-Guy-Lytton trio or the gauzy impressionism of Crispell’s recent ECM recording Storyteller.
Crispell really shines here, negotiating dramatic dynamic shifts with aplomb. Her lumpy, left-handed opening gambit on "Fire And Ice" is as heavy and rough as a formation of black volcanic; then Lytton pummels her rocky shapes with a resolutely unswinging cymbal assault. The piece comes to a sudden halt two and a half minutes in, after which the pianist issues an alternately stern and tenderly imploring statement. She also matches Guy's mad, virtuosic velocity on the penultimate track "Zig Zag." Special credit is due to Martin Pearson's lustrous, vivid recording. Throughout, spontaneity and structure complement each other, yielding music that is at once lyrical and implacably forceful.
By Bill Meyer, Dusted Magazine, New York, USA, March