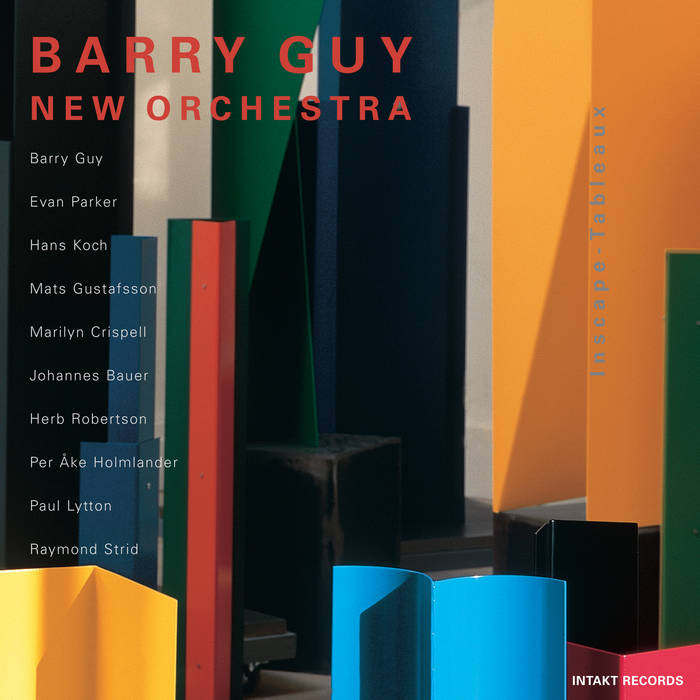 The composer and bassist Barry Guy presents here an extensive work with a new orchestra: The Barry Guy New Orchestra: Inscape -Tableaux. Like few other musicians, Barry Guy taps the current centers of improvised music, new classical music and jazz. The numerous works for the London Jazz Composers Orchestra, compositions for the strings of the City of London Sinfonia, for the Kronos Quartet or for the voices of the Hilliard Ensemble reveal Guy’s immense musical cosmos.
From long-running work with the London Jazz Composers Orchestra, Guy developed the wish to continue the orchestral work with a smaller and international group of players. In the new orchestra, Guy brings together three trios in which he has continually worked as a bassist and whose musicians he knows from the most diverse playing situations: the Evan Parker-Barry Guy-Paul Lytton Trio, the Swedish trio of Mats Gustafsson, Barry Guy, and Raymond Strid. The pianist Marilyn Crispell has played in both trios and also makes up a relatively new trio with Barry Guy and Paul Lytton. Guy has written several pieces for the New York pianist Crispell, all of which are integrated into a longer composition for the New Orchestra. Four further extraordinary instrumentalists form the sound of the orchestra: the Chicago trumpeter Herb Robertson, the Berlin trombonist Hannes Bauer, the Swedish Tuba player Åke Holmslander and the Swiss saxophone and clarinet player Hans Koch.
Barry Guy worked for two years on the composition Inscape—Tableaux for his New Orchestra. «The possibility of developing new formations as well as re-exploring old friendships allows a rich and colourful scenario to come into being,» comments Barry Guy.


REVIEWS
There are so many levels on which this magnificent set of performances led and orchestrated by bassist Barry Guy can be appreciated. What he calls his New Orchestra is essentially a pared down version of his larger London Composers Jazz Orchestra, but this smaller group is no less potent or any less convincing. For one thing, there is Guy's brilliant writing, which permits the players - and these include some of the cream of the European jazz avant-garde - to flourish through individual solo contributions wrapped around kernels and flashes of magical insights. Saxophonists Mats Gustafsson and Evan Parker exemplify the high level of improvisation, but there is a wealth of talent everywhere, including pianist Marilyn Crispell, trumpeter Herb Robertson, and trombonist Johannes Bauer. At heart, Guy is a landscape artist who paints broadly and passionately, but who pays careful attention to details. His own voice on bass is heard here more than with his larger conglomerations - an additional treat. In the end, it is the broad strokes, the vision, the grandeur that most impress. A magnificent achievement.
Steven A. Loewy . All Music Guide, March 2001


British virtuoso bassist and composer Guy continues to explore the ambiguous area between improvisation and composition, this time exchanging his London Jazz Composers Orchestra for an all-star tentet. In addition to being frequent collaborators in smaller bands, all of the participants have specialized abilities Guy puts to good use-such as Mats Gustafsson's percussive saxophone pointillism, Johannes Bauer's trombone brashness, drummers Paul Lytton's and Raymond Strid's crisp, unsystematic accents, and the rapid articulation of saxophonist Evan Parker and pianist Marilyn Crispell. Inscape-Tableaux, in seven sections, ranges from quiet and tranquil to jagged and volatile; passages of intense improv distill down to concentrated statements, with scored episodes offering respite and focus. As the instrumental combinations multiply and divide, there's a friction of unexpected voicings, and sparks fly. Though the reduced forces allow more flexibility and freedom, the music benefits from Guy's guidance.
Art Lange. Pulse, Towerrecords

Inscape-Tableaux is breathtaking - right off the bat. As the ten-piece orchestra spits up a screech, bustling, Per Ake Holmlander's tuba bumbles in, a lopsided lorry settling into a complex landscape. Bassist Barry Guy's New Orchestra is, simply, an extraordinary collection of european and American impovisers: Marilyn Crispell (piano); Evan Parker, Mats Gustafsson, Hans Koch (reeds), Johannes Bauer (trombone), Herb Robertson (trompet), Holmlander (tuba), Paul Lytton and Raymond Strid (percussion). Guy, Lytton, and Parker's recent work with Crispell is always close to the surface: the 'tableaux' - a suite of seven multi-layered pieces clustered with frightening discord and stark, irreducible beauty - builds up around them. Indeed, Crispell is in excetpional form. Frequently presented with open spaces, she unleashes labyrinths or tears pockets of space into chasms. Even when she runs below the ensemble, Crispell can set you into revierie or run you flat up against a wall.
Coda Magazin, Canada, July/August 2001